Gustav Klimt was an Australian painter born on the 14th of July in 1862.

Klimt’s career first began when he created architectural decorations, and was very successful in doing so.

When Klimt began to find his own personal art style, his work sparked a grand amount of controversy as a large painting he completed on the ceiling of the Great Hall of the University of Vienna was considered to be pornographic by multiple viewers. In result of this controversy Klimt decided to no longer take commissions off the public, although he achieved major success by creating his own paintings, where he would often include large use of gold paint, known as the material ‘gold leaf’.

Some striking pieces Klimt have produced include the following:

Klimts pieces seem to have a strong contrast in composition when one piece is compared to another; For example, often when he is painting portraits he would use bright, vibrant colours which strike the viewers and grabs their attention, yet in other pieces by Klimt (such as a portrait of a man) he would stick to dull, simple colour pallets.

The use of gold leaf in Klimt’s paintings creates a slightly reflective surface on his paintings, which would also grab attention of viewers as when observed in different angles and lighting, the piece will have different shades to it.

The Japanese style influence on his paintings helps to entice the viewers to his pieces as they stand out among the pieces where Klimt had used a common realistic style.

As a whole, I find Klimt’s pieces to be striking and eye opening as his pieces go to show that you don’t have to conform to a single art style, you should just paint what you feel and you can still become successful and enjoy what you are doing.

Gerald Scarfe is an English cartoonist and Illustrator born on the 1st of June, 1936. Scarfe has also worked with the popular rock group Pink Floyd, creating album covers and a music video called “Welcome to the Machine”.

Scarfe has also worked as a production designer for Disney, specifically on the film Hercules.

After working in advertising early in his career, Scarfe moved on to create illustrations for multiple magazines and news articles.

Scarfe went on to make an animated film for the BBC entitled “A Long Drawn Out Trip”. This animation got him noticed by Roger Waters and Nick Mason, who then commissioned Scarfe to create an illustration for the programme of their 1974 tour, which was presented in the form of a comic, which also included caricatures of the band members.

Scarfe seems to stick to a very simple colour pallet in his creations, often using only two or three colours in his pieces. Scarfe also over exaggerates facial details in his caricatures, to the point where his creations are almost alien like.

I find Scarfe’s images to be highly captivating as they stand out due to the overly exaggerated features and odd/ intriguing colour schemes.

I also find the story of how Scarfe came to be the illustrator he is today to be intriguing as it wasn’t a straight forward path. He seemed to carry out many different jobs to be more recognised as an artist, going from illustrating for news articles to creating illustrations for a famous rock band. This shows that you have to work hard and take risks in your career as it may lead to more success.

Jacqueline Ayer was an American author, illustrator, fashion designer and textile designer born on the 2nd of May, 1930.

Ayer is well known for founding the fashion brand known as Design-Thai, as well as the children’s books she has illustrated, such as “A paper flower tree” and “Nu Dang and His Kite”.

Ayer was born into a very artistic family. Ayer’s father was a graphic artist who also founded The Brandford Modeling Agency, which was the first African-American owned Agency in the United States. Ayer’s Mother was a sample cutter and shop tender for the International Ladies Garments Workers’ Union.

Jacqueline Ayer worked as a fashion illustrator for many years, working with Vogue Paris.

After meeting her husband, Ayer moved from Paris to Bangkok.

Ayer was in awe of the views surrounding her home in Thailand and decided to create a childrens book taking inspiration from her surroundings and day to day life in Bangkok.

Some striking images of Ayer include the following: 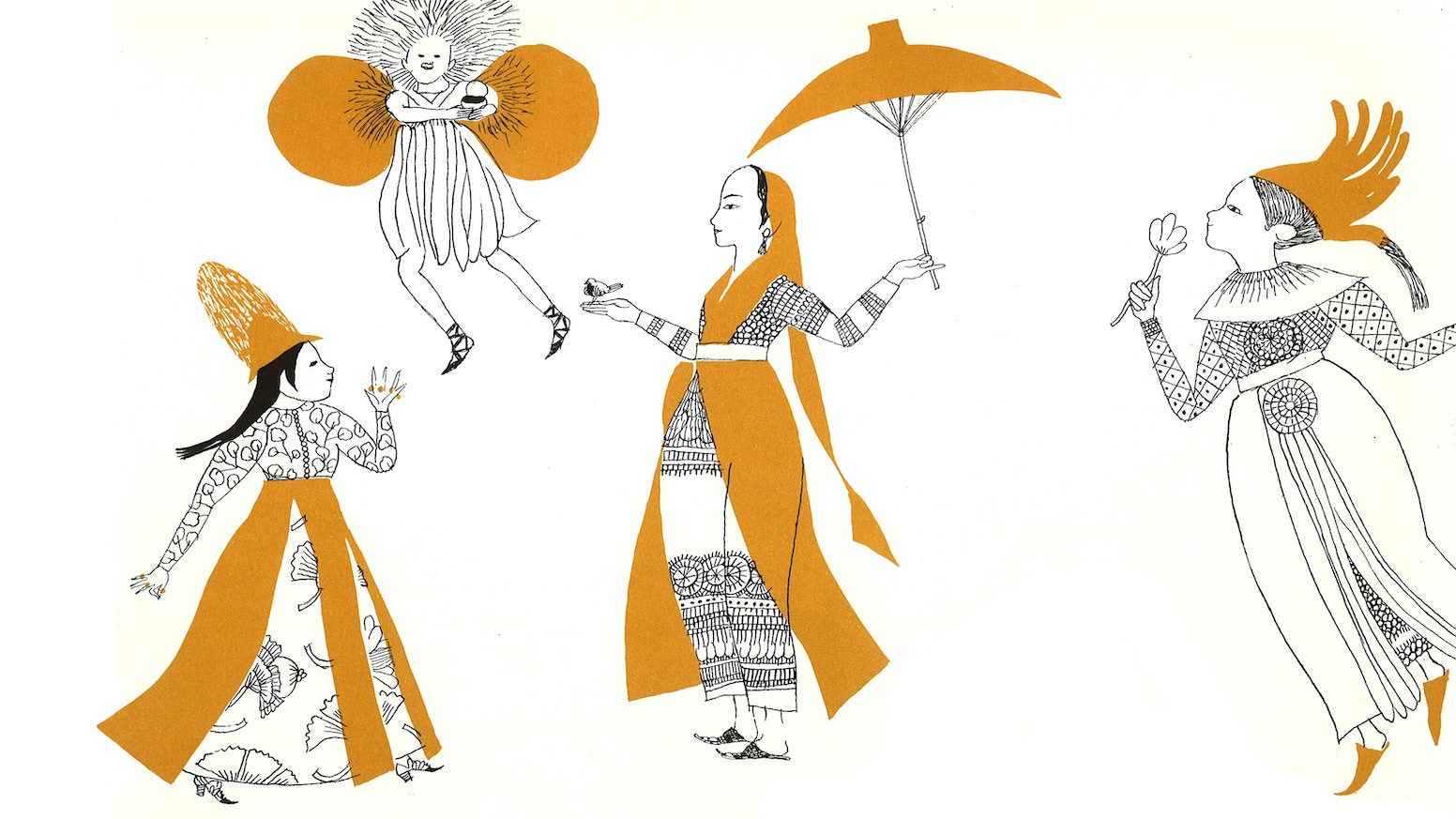 I find Ayer’s images to be very original, as she has multiple stylistic traits. For example the use of a single colour in her pieces for the clothing of a character, the environment, or a general wash to fill the page behind her characters. Ayer also doesn’t seem to stick to correct proportions when creating her characters, which gives them an interesting look.

Ayer also uses simple line marking when creating the background of her pieces, making it minimalistic, yet it is still captivating.

To summarise, I find Ayer’s images to be eye catching and fascinating as it shows that you don’t have to work in major detail in order to create interesting and eye catching pieces.